Death is the ultimate mystery; while we can understand the mechanics of biological, physical death, it is hard for any of us to fathom the ongoing journey of the soul without its corporeal suit.  Religions try to explain it in a way our brains can comprehend, people who share “after-life” experiences hope to shed some light for the curious, but no one truly knows, once the body has expired, what this energy and intelligence and love we have accumulated during our lifetime does next.

In “A Widow’s Awakening”, Maryanne Pope grapples with all of this through the transformative lens of profound grief; when her husband and “soul mate” was killed in a freak workplace accident at the age of 32, her life was turned upside down and inside out so catastrophically that she had no choice but to dive into the ocean of pain and confusion to try to make sense of her enormous loss.  Or if not “sense”, at least find meaning.

This fictionalized account of her story is by turns raw and gangly and then elegant and profound.  She leaves her ego at the door and just lays it out bare—she is not precious with herself and gives the reader the whole spectrum of her response, from grandiose delusions to suicidal despair.  The rollercoaster ride of early grief is accounted for with complete candor; her unflinching approach makes for a compelling, although sometimes uncomfortable, tale.

The book begins before her husband’s (called Sam here) death, with a peek into their marriage—although they believe themselves soulmates, don’t expect a maudlin romance.  These people are REAL with each other, both pushing buttons and boundaries as the expression of radical acceptance.  Maryanne understands that “true love” is not staring into each other’s eyes and whispering sweet nothings in each other’s ears—at least not all of the time.  True love wants and demands the best for each, with little regard for ego placating behaviors.

Sam wants his wife (called Adri) to push herself towards her chosen goals; Adri is struggling with both her motivation and means.  Her husband’s tough love both offends and inspires her and the two spar as often as they canoodle.  Together they have negotiated prickly interfamilial relations and built a strong community of support and friendship around themselves.  Of the two, Sam seems to be the wiser and more mature spouse; but his shifting world perspective into the negative (he no longer wants to bring children into it) speaks tellingly to Adri’s role as his love and light-bearer.

There is obviously no surprise element involved in Sam’s death, but the process with which Maryanne as author unspools the events of that fateful day is both meticulous and gripping.  As her fictionalized self grapples with coming to terms with what is happening, the reader is ahead of her on the path, understanding fully what she doesn’t want to accept.  In this way, she invites you into her story as both observer but also caregiver; you want to make leaps for her or at the very least be there to catch her when she makes them for herself.

Although the earliest days and hours of grief are leaden and plodding, the book never slows down.  Adri goes off the cliff into this devastation and we are along for the ride, but again the sheer naked honesty of Pope’s internal narrative will have you crying one minute and laughing the next.  Grief is never a straight line, and she takes us on several memorable tangents as she explores the full spectrum of her excursion into it.

Without spoiling anything I can say that one of the many (MANY) aspects of grief she delves deeply into is how it changes your relationship to your faith, whether you have a formal one or not.  Adri is not a true believer at the beginning of the story but her “awakening” is nothing so mundane as finding religion.  Instead she wrestles both her attraction to and misgivings about Christianity to the ground in both humorous and insightful ways.

She understands above all that grief plays tricks with the mind and that as sentient beings we are always seeking meaning; even in tragedy, even in the senseless.  Adri, as Maryanne’s proxy, is determined that her husband’s fluke death not be a sacrifice made in vain, and that is what drives her forward and ultimately gives her a reason to live.  She is brave enough to expose her reasoning in this process, even when she knows you will roll your eyes, even if she knows you will want to challenge her.

In this bold way, she leads you in your role from the observer, to caretaker to soulmate.

As her relationship with Sam continues to grow in his absence, Adri (and by extension, Maryanne) invites us all to up our game in relating to both each other and to our world.  She asks us not to deny our true selves; she asks us not to placate others or ignore our planet’s challenges.  In her husband’s death, she was able to see the meaning of life in all of our relationships. 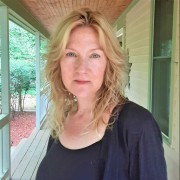 Kara is Managing Editor at Heart and Humanity Magazine as well as an editor, columnist and social interest group leader at The Good Men Project. Read her on Huffington Post and her personal blog "Your New Best Friend". Follow her on twitter @kpk_newbf