Mr. Joe Bryant was an educator who demanded excellence in his students and taught me the true meaning of being a man and leading by example. He lived an unsullied life and expected no less from those who were under his tutelage. He rejected mediocrity with a ferocity few have known.

Many of the axioms I live my life by today can be directly traced back to Mr. Joe Bryant and his influence on me at a time when I needed someone to show me the way to greatness, to take me by the hand and lead me to manhood and the realization of my full potential.  In short, he changed my entire life.

My first interaction with Mr. Bryant occurred when I was halfway through my sophomore year of high school. We moved around quite a bit during my youth due to my dad following work, but we would always return to what I consider to be my hometown, in southeast Georgia.  We had just moved back to that town in the middle of my 10th grade due to some health complication my father was experiencing.

It was a strenuous time for me mentally and emotionally and I was teetering on the verge of desolation without even realizing it.  Little did I know that I would look back on this period many years into the future and pinpoint it as a pivotal moment in how my life would turn out.  I was making choice that had the power to shape an entire future, yet I was unaware.

I was placed into Mr. Bryant’s American Government class and I was way behind, but I caught up fairly quickly and would have the honor of having him as a teacher for several other courses before I graduated high school.

He had a deep, bellowing voice and carried himself with a stature and persona that I had never before seen.  The man exuded excellence and I must admit, I was extremely intimidated by his presence.  He spoke with a vocabulary and cadence that was lyric and moving at the same instant and you would almost feel as if you were being hypnotized by his lectures.

He refused all forms of excuses for failure and in the beginning, I despised him with a passion. I was content with the compassion from others and their overwhelming desire to accept my weaknesses.  It made my life easier if teachers, and adults in general, didn’t expect too much of me.  I could float through my adolescence with ease and participate in all of the debaucheries that it had to offer upon its altar of ignorance.

Unfortunately, (fortunately) Mr. Bryant would have none of that.  He would accept nothing short of everything your abilities had to offer.  He would push and drive and shame and encourage and mentor you all the way to the mountaintop. He would not relent until you had exhausted all you had to give.

He made you realize that you were more capable than the system would have you to believe.  He made you understand clearly that hard work, punctuality, and effort were the keys to success. He honestly believed in us at a time we needed someone to believe in us more than we could ever know.

I soon begin to admire that quality above all else and I have attempted to surround myself with such people ever since.  He knew how to mentor others, how to pull from the depths of their abilities to seize greatness and hold onto it like a vise.  He made me long for and crave the best of what I had to offer and I soon developed contempt for anything less than my absolute best effort.

I became addicted to the pursuit of excellence and I am a better man for it.

His unflinching honesty in every situation became a beacon of hope for me.  I knew above all else that he would only accept my optimum and not give false hope for mediocrity.  His dissertations on life became to me a battle cry and his approval of my choices and of my effort exerted were badges of honor to be worn with the utmost pride.

He was fair in his judgments and firm in his expectations and I needed that at a time in my life where horrible paths seemed pleasant and true.  His guidance and mentorship were pivotal in my journey to manhood.  Although I made many mistakes on my voyage through life, his chastisement and encouragement were always in the back on my mind showing me the path to redemption and reward.

Later in life, I learned that he grew up locally in the South during a time when segregation and true racism were still alive and well.  He knew a struggle few would understand as he was bussed across the county to be integrated into white schools.  He faced adversity, humiliation, and violence to grab ahold of greatness and not relent to lesser than what he knew in his soul he was worthy of.

His journey was instrumental in forming his style of education.  He wanted us to truly comprehend the opportunities before us.  He desired only we seize that for which we were destined.  He wanted greatness for us all.

THIS is the power that teachers wield and few embrace the challenge and take up the torch to lead the youth of this nation out of mediocrity and into the pages of history.  I owe him a debt that I will never be able to repay.

I’ve gone back countless times and checked in with him and thanked him for what he did for me.  He would always dismiss it as nothing, but, to me, it was everything.  I hope he knows how many lives he changed and how much greatness he achieved through his grateful students.

I ended up marrying an art teacher and it makes me so proud, how she pours herself into her students.  There have been few weekends when she hasn’t spent time preparing for class or working with students and even fewer days where she left school “on time”.  Her students represent the future and she takes her stewardship of them very seriously.  She considers it a divine honor to have the trust of her administration and the parents to be a part in shaping who they will be and what they will achieve.  They all mean the world to her and she goes to great lengths to ensure their success and growth.

It warms my heart to know that there are educators out there taking the same difficult path that Mr. Bryant did.  I’m sure it is much easier to just do your “job” and not bear the burden of requiring greatness from your students. It must be easier for teachers to not become attached and see the students as just a grade or student in a course. But, then again, the path to greatness is not easy.

How did a teacher change your life?  Did you live up to the greatness they saw in you, or did you cave to mediocrity?  It is never too late to take up the mantle of your dreams and make them proud. 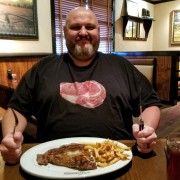 Philip Nelson is a 21 year veteran of law enforcement and has enjoyed a life-long love affair with the written word. In addition to his law enforcement experience, he holds a B.S. in Criminal Justice, is a law enforcement instructor, firearms instructor, and has served most of his career in supervisory and management roles. He writes on the topics of leadership, management, relationships, fishing, and issues related to positive male image. He lives just southwest of Atlanta, GA with his artist wife, who just so happens to be his childhood sweetheart and best friend.