I wrote this essay in fall 2014 because I’m a survivor of domestic violence who was badly triggered by the Ray Rice abuse video. My essay has since been published in two different online magazines, then subsequently removed without warning, and without explanation, despite my inquiries. Deep gratitude to Shawna Ayoub Ainslie, Kara Post-Kennedy, and Raymond Baxter for providing a safe, secure space for me to republish (with small edits) this piece for the third time. While the original context of the #WhyIStayed debate is perhaps outdated (we say #MeToo now), unfortunately, the epidemic of domestic abuse, gendered violence, and victim-blaming is still quite relevant.

CW for mentions of stalking and physical, emotional, verbal, and sexual abuse

Nearly four years ago, I was a huge supporter of the people coming forward to share their abuse stories, via social media and the hashtags #WhyIStayed and #WhyILeft, both because I feel it’s important to open a dialogue about the dynamics of abusive relationships, and because it gave public voice to victims and survivors who, in addition to being abused, have been silenced.

But I got mad that we have to explain ourselves.

Why was there no #WhyPeopleHit hashtag, where psychologists versed in DV shared information to raise social consciousness? Why was there no #WhyIHelpedThemLeave hashtag, where supporters, family, friends, and DV shelter staff could have been the ones saying things like, “I met her for lunch twice a week so we could talk without him being around, because he isolated her from everyone who might be able to help her” and “I could tell they were struggling financially, so I helped them find a job as a first step towards leaving”—statements that would illuminate the complexities of DV situations and demonstrate compassion that readers could emulate?

I think we’ve reached a point where hearing only from victims and survivors isn’t cutting it. In other words, un-silencing is great but I don’t always want this mic. We, as a society, need to see non-victims showing that they understand, care, and are willing to do something about it.

Victim-blaming is a real thing. We did it when we asked why Janay Rice married her abuser instead of why Ray Rice punched his fiancé, or when we accused the dozens of women alleging rape against Cosby of a massive-scale collaborative takedown plot instead of demanding to know why Cosby admittedly drugged young women, or when we harped on the fact that Brock Turner’s victim was drunk and unconscious instead of why Brock Turner penetrated an unconscious woman. We level up on victim-blaming when we discuss whose life is more severely impacted, the victim or the perpetrator. We did it to Harvey Weinstein’s victims. To Matt Lauer’s, Louis C.K.’s, Kevin Spacey’s, Roy Moore’s, and a nauseating number of others. We do it in response to every. single. report. of domestic violence and rape.

In America, if you are accused of a crime, the burden of proof lies with you, and the most visible exception to that rule is when people report being abused, stalked, sexually assaulted or harassed, or raped. Prove it, society says. And even when we can, our evidence, our words, and our bodies, often aren’t enough.

When I was younger, I casually dated a guy I’d known for years. When I broke it off, he couldn’t handle it and began bombarding me with emails, texts, phone calls, and eventually, unwanted and unannounced visits to my apartment and workplace. One night, he followed me as I walked home from work and tried to block my entrance once I arrived.

Yet another night, he showed up on my porch after being in a bar fight, his knuckles bloodied. Two of my male friends came over and convinced him to leave. When I went to the police, I was told there was nothing they could do unless he trespassed or hurt me—and that even then, it was my word against his.

The stalker eventually went away, which makes me lucky. Years later, though, I found myself in the aforementioned abusive relationship. I remembered that visit to a police station in another town, and I didn’t feel like anyone could or would keep me safe. I had to rescue myself, and it was going to take some time. Even my abuser, at one point, asked me why I stayed. Why, if I was so miserable and scared, didn’t I just leave him already?

“You love being a victim,” he sneered in conclusion.

Unfortunately, the ones committing the violence are by far not the only ones who have a warped and reductive view of what it means to be a victim.

Four years ago, it began to feel to me like #WhyIStayed, while illuminating and visible, was inviable in terms of boiling it down to one concrete reason that people might understand and accept. #WhyIStayed is a hot mess of reasons, and #WhyILeft is really quite simple, at least for me personally: I realized I couldn’t live that way, he didn’t love me, it would never change, and I and my child were in serious, even mortal danger.

What’s crucial to, and seemingly missing from, our understanding of domestic violence and pre-supposed victim mentality is acknowledgment of the way being abused paralyzes, micromanages, and holds hostage every aspect of the victim’s life. Let me give you a personal insight into my thought process as I planned my escape:

Does it go without saying that all that wouldn’t have fit in a #WhyIStayed tweet?

Not to mention, all those thoughts came after I decided I’d had enough, when making it work and agonizing over whether we loved each other were no longer my biggest considerations. This cyclical, obsessive, dead-ended thinking all but consumed me then.

Now, it’s chatter by acquaintances and the media about DV that could consume me, if I wasn’t now so adept at managing my triggers. I am certain that many don’t realize there is no profile for a typical victim of abuse. I’m not a “gold-digger” or “fame-whore,” not a “bitch who deserved it,” not too dumb or self-loathing to stick up for myself. No one is, though you wouldn’t know it if you read and listen to commentary on such news stories. I’m an educated and sensible woman. I knew, logically and factually, that ending the cycle of abuse and salvaging the relationship was, to understate, statistically unlikely. I had the hotline numbers and the pamphlets, and at the end, a support system.

But logic, reasoning, “facts” that even the strongest, most self-respecting women “know” don’t mean shit when a man is sitting on your chest, pinning your arms to your sides, his hands pressed air-tight over your mouth and nose, leaning in close to your face to hiss stop screaming, cunt, no one’s coming to help you.

While I’m writing this from a safe place where I rarely feel those hands anymore, I will tell you that what has stayed with me more than anything else is the fact that neighbors saw this man assault me and heard my pleas for help, and they went inside and drew the shade. His family and friends, who witnessed plenty of aftermath and sometimes even the assaults themselves, told me I needed to communicate better and begged me not to go to the police. One reminded my ex of how thin I was when he saw him knock me to the kitchen floor: you’re gonna really hurt her someday and then everyone will know.

And so what if they did? No one’s coming to help you.

Fear has a funny way of compounding when you realize you’re surrounded by indifference toward you and concern for the person you fear.

That fear didn’t go away just because I did. And #WhyIStayed can be distilled, if we must, to that one word: fear. Unless we fully understand the unchartable complexities of living in fear (not to mention the way trauma affects memory and the ability to narrativize one’s worst experiences with consistent accuracy), we shouldn’t be asking victims why they acted all victim-y. That’s part of the problem, and not a small part.

Denial of abuse is a form of abuse.

If we want to help, instead of perpetuating a cycle of misunderstanding about domestic violence by blaming, doubting, and profiling victims, we should be asking why abusers hit and rapists rape, demanding that they be held accountable, and asking victims and survivors what we can do for them:

Be a good listener. If someone shares with you that s/he is being abused, ask what you can do and really listen. Is s/he asking for advice, or just in need of an ear? Giving unsolicited advice can verge on victim-blaming because our gut instincts—mine, too—are to say, leave now. As I outlined earlier, the thought process for escaping DV is exhausting. It is even more so to try to articulate to someone else while you’re in it without feeling like you’re making excuses for staying, burdening others, asking for charity, sounding crazy, exaggerating, or being pressed for proof. The presence of children, lack of access to one’s own money or vehicle, no support from one’s friends and family, stigmas associated with same-sex relationships and non-binary gender identity, obligations to uphold certain family or spiritual values, and more are additional barriers to leaving. Trust victims to know their own challenges and limitations, but ask how you can help them to navigate those challenges and overcome those limitations.

Believe people who say they’ve been abused. No one has ever become rich or famous by accusing someone of domestic violence or sexual assault. False allegations are incredibly rare—between 2 and 8 percent of all rape allegations, and similar numbers for false allegations of domestic violence. There are precious few up-sides to going public about having survived such crimes, but there is one big one: the act of un-silencing itself. It can be very liberating and therapeutic if the survivor is supported. It can be re-traumatizing and nightmarish if not.

Evolve as a human being with a heart. Stop believing that your discomfort upon learning about another’s struggles, or your notion that others should toughen up, is more important than being a compassionate, empathetic member of your community. Conditioned and unchecked lack of empathy for other human beings is why some people are abusive.

Speak up when you hear victim-blaming comments. You don’t have to do battle or spout statistics, and you shouldn’t be a bully yourself. You could say, “None of that matters more than the fact that this person assaulted that person.” Re-center the victim in considerations of empathy, and re-center the criminal in considerations of wrongdoing. You don’t even have to directly engage a bully; your “speaking up” could be as simple as talking directly to the survivor, at a gathering or in a Facebook thread, and expressing empathy: “I’m so sorry that happened to you. What can I do?” Normalize an empathetic response toward survivors—and when you can, do it so others, especially the bully, take notice.

Support local domestic violence shelters and organizations. Volunteer if you have time; donate if you have money. Help publicize their events and fundraisers through social media. Learn the hotline number and hand it out.

Educate yourself on these issues, and share what you learn with others. Start with The National Resource Center on Domestic Violence, but also remember that survivors are the best experts on our own experiences. Listen to us. 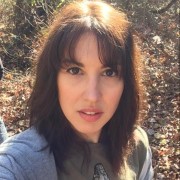 Stacia M. Fleegal is a poet, essayist, blogger, and mama residing in central Pennsylvania. Her essays have appeared at Salon, Scary Mommy, ESME, Quaint Magazine, and more, and are forthcoming at Blood+Milk. She has published two full-length and three chapbook poetry collections. Her poems have appeared in numerous literary magazines and several anthologies, and were recently nominated for Best of the Net 2017. She is director of the Center for Creative Writing and blogs at anotherwritingmom.wordpress.com.