Grief leads such a contrary existence. People have to die in order for it to be born.

My brother died in Richmond, Virginia on a set of railroad tracks. He was 25. An ocean away, I died in Strasbourg, France in the Musée Tomi Ungerer. I was 22.

His cause of death? Unknown. There wasn’t enough evidence to point to a definitive conclusion, only lightly sketched conjectures.

My cause of death? Also unknown. I may be trilingual in English, French and Mandarin—polylingual if you count being able to understand Cantonese—but there’s no word in any of those languages to describe someone who’s lost a child or sibling. No word like widow, widower, or orphan to capture what my parents and I had become.

As a reader and writer, I thought I knew how to shape the lines and curves of words, to listen to the spaces between the silence. But when it came to my brother’s death, I found myself struggling to string together sentences, fingers fumbling at the fridge and dropping every magnet before I could piece together a poem.

I no longer knew who I was without my brother. All I knew was that I kept dying because grief is a weed, growing stubbornly in all the wrong places. An illustrated ceiling in a Lyonnais bookshop.  A Teresa Teng song in a Parisian restaurant. An art installation in a Dublin museum. An old elementary classroom in Washington, DC.

119 miles and six months away from where my friends and family buried my brother, I knelt, arms wrapped around a second-grade student who’d just told me about losing two of her brothers in a car crash.

When I let her go, she walked away and extracted a gray marker from my plastic bag. I watched, bewildered, as she sat down next to me and uncapped the marker. Then, gently picking up my hand, she wrote, “Love,” followed by a heart.

For a long moment, I stared down at her artwork. Then I tucked a braid behind her ear and asked, “Do you want to write on my arm?”

She nodded, so I rolled up my sleeve and offered my right arm to her. After selecting an orange marker, she began writing. “I sad…” The next word looked like an assortment of letters blended into a blob, but when she tacked on a “t,” I realized that she meant “that.” Curious, I waited for her to finish her sentence, and then tears stung my eyes.

She’d written, “I sad that your brother died.”

Here she was, a seven-year-old who’d lost two brothers, trying to comfort me, a twenty-three year old who’d lost one brother. I swallowed and blinked back tears before I started sobbing in the half-illuminated classroom. I was three times her age, had seen more than fifteen countries and thought the world had ended when my brother died. But somehow the world began anew with this constellation of a child who didn’t even reach four feet, who made me wonder if a human body could contain a galaxy.

“Thank you. I love it,” I told her, the words scraping my throat. “Do you want me to write something for you?”

Again, she nodded. I took the gray marker and her tiny hand, and carefully wrote, “You’re smart and I love you.”

She studied her hand, tilting her head as she attempted to decipher my handwriting. Finally, she looked up at me and asked, “What’s it say?”

Suppressing a laugh, I read the words aloud and added, “Because you are and I do.”

“Oh,” she said, a huge smile blossoming across her face. Then she skipped off, braids bouncing, happy as a button.

I wore my sleeves up, displaying the words I’d never been able to tell myself, but my decorated arm drew too much attention from her classmates. Numerous enterprising artists also wanted to write on me until I firmly tugged my jacket sleeves down to my wrists, telling them that there was nothing to see.

When the school day ended, two of my coworkers and I took the bus home, dropping into a Five Guys and Fries on the way back. I didn’t notice that I’d rolled my sleeves up until I handed the cashier my credit card.

The next day, as soon as my student saw me in the cafeteria, she ran up to hug me. My words still adorned her hand, and although her words faded from my arm more quickly than a summer watch tan, they taught me that grief doesn’t always have to kill. 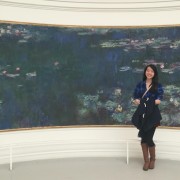 Sarena Tien is a queer Chinese-American feminist and Francophile. She is currently a PhD student in French Literature at Cornell University. Her writing has appeared in online publications such as Transitions Abroad, The Feminist Wire, Bustle, On She Goes, and Argot.